Over the weekend I re-visited a city I grew to love over my short time living there last year – Vienna.

In a short three or so months, it became my home; one I became rather fond of. It was my first experience living outside of my country (UK) but most difficult was not knowing the language, which I quickly had to familiarise myself with. I only ever learnt French and Spanish at school (which I became rather fluent in at the time), so this was a completely new experience. Looking back, I realise how much it changed me as a person and gave me the confidence to travel more and more, going forward with new experiences abroad.

One year ago, I attended the UN COPUOS (United Nations Committee on the Peaceful Uses of Outer Space) Scientific and Technical Subcommittee. It was a privilege and honour to present there on behalf of SGAC. This year unfortunately, I have been able to attend the subcommittee, but I have been following it closely on Twitter at #COPUOS. Instead I was able to return over the weekend while a number of people were visiting the city, along with the friends I made while I lived there. Vienna is only 4 hours away from Munich!

This season is typically ball season in Vienna, something I was unfortunate to miss while living in the city. It was a great excuse to return and see some old friends (see featured image). Many of us booked to attend the Johann Strauss Ball, as part of The Sound of Vienna season – a very classical Viennese ball.

I suppose I like to think I can dance. Maybe after a few drinks, I might try out some of my moves! My dancing skills may well be questionable by most. It was great therefore to have some Austrian natives (friends) teach us how to Waltz and Quadrille.

I knew of the former, quite well knowing some classical music, but I only very vaguely knew how to dance it.

Quadrille was completely new for me. It does seem rather complex and it is hard to get right.  There are several parts to learn in the sequence, making it quite tricky to bring together. In particular, I was taught the dance in English and knowing only a little German, it was difficult to understand the instructions given from the stage. The sequence was sped up more and more, which made it even more difficult but rather funny.

Of course, Vienna wouldn’t have been complete if I hadn’t revisited a Viennese cafe for Viennese coffee and torte (cake) (see featured image above).

Overall, a very classical Viennese weekend. I shall hope to return soon for SpaceUp:Vienna and Yuri’s Night.

UKSEDS are working with the British Interplanetary Society who are UK National Coordinators for World Space Week.

World Space Week 2013 is all about what many consider the Next Frontier: the planet Mars. Humanity is quickly conquering this new frontier. Mars Curiosity is the largest rover ever brought to another planet, discovering new features of the Red Planet every day. Read here.

Help us make this the biggest World Space Week yet!

What better way to start the week than with the Mars Society UK annual conference, on Sat 5th October at the National Space Centre, Leicester?

The British Interplanetary Society South West Group will be holding lectures at the Bath Royal Literary and Scientific Institute.

The British Interplanetary Society will be finishing World Space Week in style by celebrating its 80th birthday on Saturday 12th October in Liverpool.

Run your own event! There are lots of great FREE resources to inspire you and help your ideas take off.

As a permanent observer of the Scientific and Technical (S&T) Subcommittee of the Committee on the Peaceful Uses of Outer Space (UN COPUOS), SGAC participated in the 50th session held from 11-22 February, 2013 at the United Nations in Vienna, Austria.

In the first week, SGAC Executive Director, Andrea Jaime, presented SGAC’s general statement in which she covered SGAC’s developments since the last session of S&T in February 2012. More details about the first week can be found here.

Presenting the SGC 2012 results at the UN COPUOS

In the second week, I presented the results and recommendations of the 2012 Space Generation Congress held September 27-29 2012 in Naples, Italy. In my presentation to the Scientific and Technical Subcommittee, I provided the delegates with an overview of the Congress, noted some of the many prominent SGC speakers (including the first SGC fireside chat) and presented the topics and specific recommendations from the five working groups (Industry, Agency, Society, Exploration and Earth Observation). You can find the presentation here.

During my activities on behalf of SGAC, I participated in the Action Team 14, the UN’s Action Team on Near Earth Objects. I was pleased to hear of the UN working on an international level to seek solutions to combat a threat to our planet.

“The Subcommittee endorsed the report of its Working Group on Near-Earth Objects (NEOs) that recommended the establishment of an international asteroid warning network (IAWN) by linking together the institutions that are already performing many of the functions, including discovering, monitoring and physically characterising the potentially hazardous NEO population and maintaining an internationally recognised clearing house for the receipt, acknowledgment and processing of all NEO observations.”

This was reported in SpaceRef here.

During discussions about space debris, we had a surprise call from the International Space Station by Commander Chris Hadfield (Canadian Space Agency) who highlighted the increasing dangers they face on the ISS. 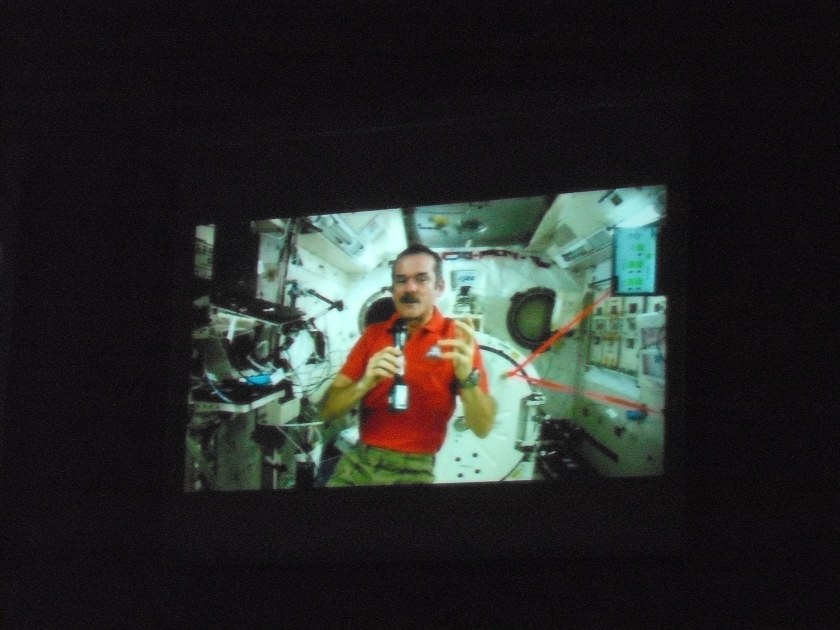 Further news about the second week can be found here.

Me holding the “Union Jack” – the UK flag, at the United Nations.