Prof. Tolyarenko was the Director of the Masters Programmes at ISU and now makes up part of the senior faculty. Throughout the Cold War he worked on the Soviet Space Programme, which was highly secretive at the time. At that period, the major superpowers (the Soviet Union and USA) were in a sustained state of political and military tension, which if erupted could have destroyed Earth with the threat of nuclear warfare.

Tolyarenko could now speak of the Soviet Space Program. He spoke of Tsiolkovsky and Korolev who laid the foundations for the Soviet space programme, quoting Tsiolkovsky:

— taken from a letter written by Konstantin Tsiolkovsky in 1911

Men are weak now, and yet they transform the Earth’s surface. In millions of years their might will increase to the extent that they will change the surface of the Earth, its oceans, the atmosphere and themselves. They will control the climate and the solar system just as they control the Earth. They will travel beyond the limits of our planetary system; they will reach other Suns and use their fresh energy instead of the energy of their dying luminary.

Konstantin Tsiolkovsky developed the “rocket equation” and is considered one of the founding fathers in rocketry and aeronautics.

He later inspired Sergei Korolev, who is considered the father of practical aeronautics and was able to apply earlier work by Tsiolovsky and oversaw the successes of Sputnik and Vostok.

The first “space roadmap” by Tsiolkovsky

Later, he highlighted the achievement of the launch of the German V-2 missile (3 October, 1942) which resolved many issues with regards to launching rockets.

He showed us a preview of “The Fever of ’57”, the American Documentary by David Hoffman http://www.fandor.com/films/the_fever_of_57. The documentary was made in 2007, fifty years after the Soviet Union made history by launching Sputnik into space; a defining moment in human history. Hoffman draws on lost footage and informative interviews to detail the remarkable story surrounding the launch of Sputnik.

Tolyarenko noted the differing limits of where space begins as the major powers sought to reach the final frontier. NASA considers space above 50 nautical miles (92.5km) altitude, whereas the World Sports Federation considers it 100km. According to the NASA National Aeronautics and space act (1958) it is considered “outside the Earth’s atmosphere”. And finally, according to UNOOSA (United Nations Office for Outer Space Affairs) “There is no agreement on the limit of outer space”.

Tolyarenko highlighted some of the recent achievements by Roscosmos, the Russian Federal Space Agency: 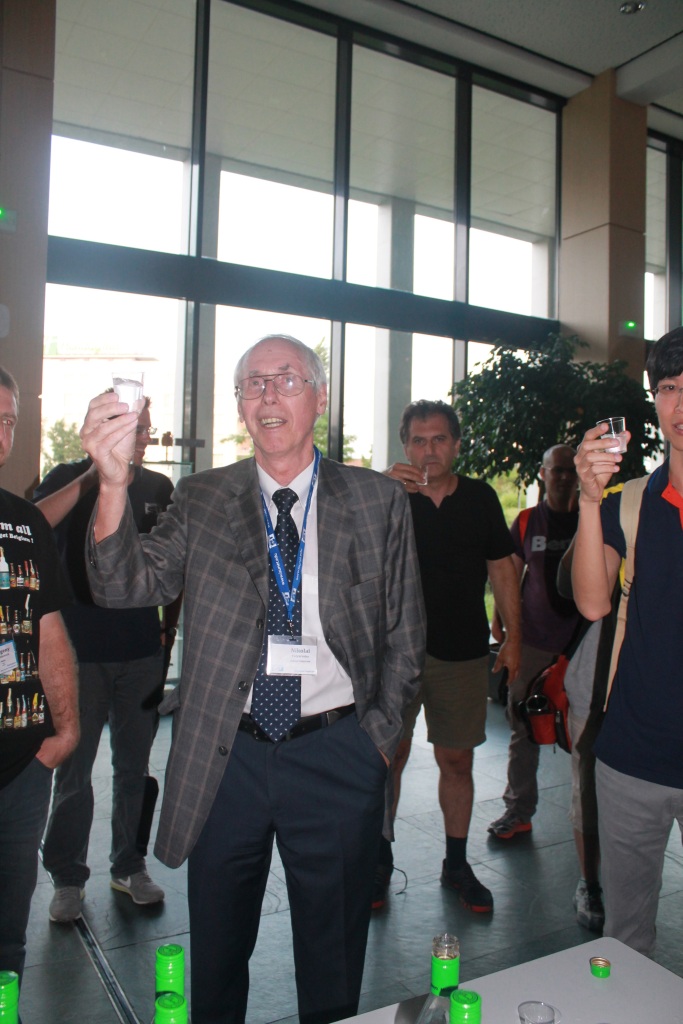 A toast by Tolyarenko to open the Russian reception following his lecture.

Me with Tolyarenko by Yuri Gagarin (first human in space) statue